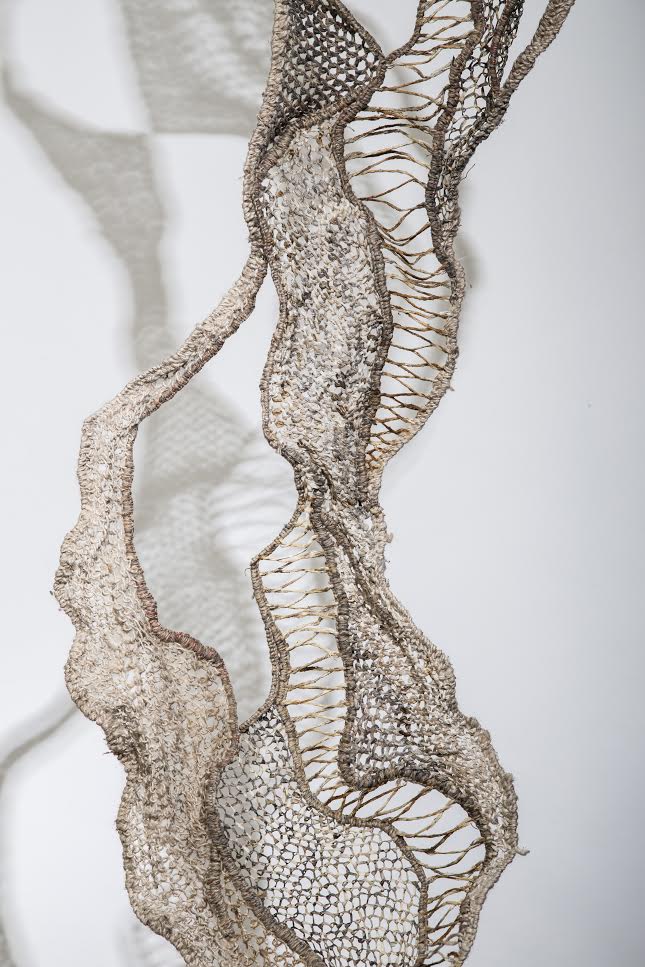 Diversity (or Diversity: Textile Art) . We are a mixed media textile group  http://www.diversity-textileart.com/

Diversity is a group of nine textile and mixed media artists based in South East England who exhibit together on a regular basis. As a group and individually the artists aim to produce work which provides a fusion of contemporary and traditional textile art for exhibiting, while continuing to develop and experiment with their own ideas and techniques.

For this exhibition the group presents work interpreting the theme EDGE. Artists took inspiration from sources as diverse as our coast and the SW coast path, cityscapes, Venice, issues around memory and belonging and a sense of place. ​Building on our previous exhibition On the Edge, this work offers a chance to focus in on issues and respond to details which are important to us.

Lois’s work as a stitched textile artist allows her to consider many issues affecting our lives today. She has covered environmental issues including the pollution of the world’s oceans and sea life due to plastic waste. She has stitched and printed cloths to highlight the importance of developing brownfield over greenfield sites. Since achieving an MA in Textiles in 2016 she has been looking at memory and how personal identities are created by singular life experiences.

By taking a slow approach to her work Lois considers how memory affects our stability and identity. Using cloth as the fundamental fabric of life, tangled threads echo situations we are confronted with daily. Experiences are laced with memories of those past. A rhythm in life is certain and things disturb that rhythm with frequent regularity.

The use of rust dyed marks on her cloths and paper indicate man’s impact. For this exhibition Lois’s work has developed, fusing her ideas on memory and environmental pollution including the now finally visible issue of plastic waste.

Terry is inspired by the coast and the sea; for her, beaches are best in spring and autumn, when a brisk walk on a clear day yields interesting finds to be collected, drawn and stitched. Rust from the landslip at Lyme and stripy Devon pebbles, holed oyster shells, fossils, sea glass and tatty feathers. And that view of distant cliffs and sea sparkling in the sunlight.

Items discovered in this way often find their way into Terry’s sketchbook. Textures, lines, patterns, atmosphere, walking and collecting, words and sounds all contribute. She dyes and prints her own fabrics, using Procion dyes, paint, rust and found objects, with the muted colours of the sea and coast combined with hand and machine stitching to add texture.

Her current work focuses on the forces which shape our fragile coastline, from slow, geological and natural processes to the effect of animals and the impact of humans (positive and negative).  She is also a teacher and co-runs InStitches textile studio in Wokingham.

Chris works both individually and as part of Diversity and has been interested in crafts from a young age. After finishing college as a mature student she co-founded Diversity in 2007 with fellow textile artist Karen McCarthy.​

Inspired by looking closely at nature’s textures and colours, Chris generally works on a painted paper ground which is then enhanced with fabrics, threads and other embellishments.  Her pieces always have an element of stitch, both machine and hand, and always include her signature French knots.

The inspiration for Madelaine’s textile art comes from her many travels, especially time living in Africa, the Middle East and Asia. She collects and uses native fabrics, particularly Thai silks, Indonesian batiks and African kangas to make multi-coloured hangings. Stitching with these beautiful unique fabrics gives her work a distinctive quality.

Influenced by religion and the environment, Madelaine makes and exhibits decorative tactile wallhangings. Working on commissions from churches has been of particular interest.

After working in commerce for 30 years Elaine retired to fulfil some creativeness, enrolling at Merrist Wood College to study floristry and flower arranging, which encompassed plant knowledge, botany and horticulture. Following this with competitive work, gaining Gold and Silver medals at Chelsea Flower Show, she opened her own business doing wedding flowers.

She was instrumental in setting up the Wokingham branch of the Embroiderers’ Guild and was the Founder Chairman.

Elaine’s work usually starts with an idea, which could be from the urban landscape, or words or phrases. She keeps a sketchbook before working on an artist’s canvas which she paints with inks using a muted palette and minimum stitch.

Joan is an embroidery mixed media artist and maker based in Reading, Berkshire.

Born in the Potteries, Staffordshire she was influenced by her creative parents, the pottery industry and the beautiful countryside only a short drive from her home. Sewing and making a variety of objects from a young age, she continued to enjoy this self- taught creative process throughout her adult life.

Moving to Reading opened up an opportunity in 1984 to study creative embroidery in Windsor which unlocked a creativity and after several years she graduated with a 1st Class Honours degree, Art in a Community context, from Roehampton University.

Joan continues to be excited by things that she sees in everyday life and is always looking at the minute details of texture, colour and patina of surfaces which never fail to ignite endless ideas. Fabric and thread are central to her work combined with paint, print and machine embroidery and a wide variety of techniques.

Barbara’s work is conceptual and mostly three dimensional in structure reflecting her background in theatre and has mainly focused on themes of personal identity, memory, space and loss. She usually begins with an emotional response to something seen or read, an object, quote or written article that resonates with her in some way.

For example, her recent installation in the “Narrative Thread” exhibition was inspired by a vintage metal cot seen outside a junk shop. It appeared lost and abandoned and she felt compelled to rescue it. This became the focus of her work in which she examined how we seek to protect our children in a framework of security and love, with varying degrees of success.

The techniques Barbara employs include stitch, fabric manipulation, printing and text, while her materials range from vintage linens and cottons to plastics, wire and plaster, each specifically chosen to express the concept. The stitching is often quite physical, emotional and repetitive and sometimes therapeutic.

Marian completed a four-year City and Guilds Course in Creative Embroidery in 2002 and since then has attended an Advanced Textile Workshop.

The inspiration for her pieces of work has been developed over the years, mainly from observation, sketches and photos from nature, beaches, landscape and organic shapes. She likes to re-visit the same themes and scenes to get the essence of the subject.

To obtain the effect she wants in her work, Marian uses numerous forms of mixed media. These include paper, paint and inks, gesso, fabric, a variety of threads and wire, with both machine and hand embroidery. 3D forms make up a large part of her work.

Colour and landscapes provide Julie with a constant source of inspiration. Her art work is an emotional response to scenes she has found intriguing. Captivating views, often of the countryside make her stop and look, providing a brief escape from the preoccupations of life.

Julie’s photographs become the starting point of the work followed by sketchbook trials to explore the subject matter, colours and textures.

Final pieces involve a variety of mark-making media to create her impression of the scenes she loves. These are then finished with machine and hand stitch.