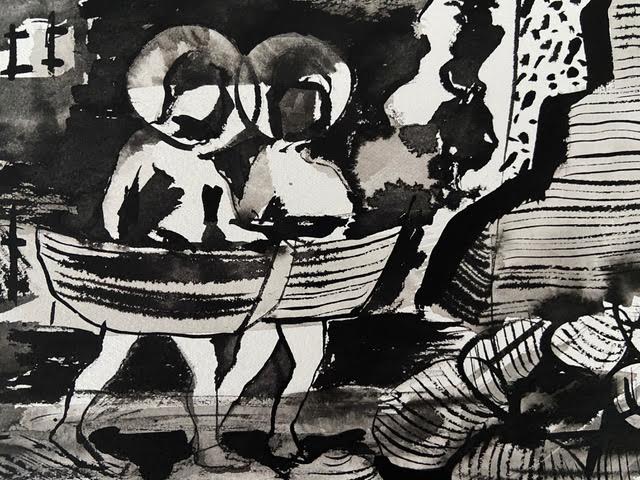 When Allan Green and Moira Baumbach moved to Beaminster a few years back they were struck
by the creative vibe on the Jurassic Coast. As artists it seemed a particularly fertile
environment. For Allan it was land/sea scapes, for Moira an expansive connection with nature.
However in considering an exhibition at Town Mill Galleries in Lyme (October), things were less
clear. Moira suggested inviting friends to contribute and so Derbyshire based Sarah R Key and
David Manley and Londoner Stuart Reid joined the party. It makes for an eclectic mix and,
whilst initially disparate, reveals connections on closer inspection.
“Variety of themes, approaches and media creates a lively and intriguing experience for visitors”
says Moira, who instigated and curated the collaboration. Moira’s work has a basis in her love
of printmaking and concern for environmental issues; a long standing project is focused on a
series of prints on endangered species of British birds. Her approach is infused with an English
Romantic sensibility demonstrating strong lines, muted colour and powerful forms. She sees
herself as an emerging artist having studied recently at Plymouth College Of Art after a twenty
year career in the Civil Service and raising four children.
Allan has been in love with the south Devon coast where he lived for over twenty years but is
finding the Dorset landscape equally rewarding. Widely exhibited he is drawn to topographically
strong viewpoints expressed through vigorous brushwork in oils and the scene exerts a force
field that is hard to ignore. “Besides which I am finding the sense of place here is subtlety
different to that of South Devon” he opines “so there are elements of the land and seascapes
yet to be fully explored”.
Amongst these are the hollow ways that the county is justly famous for. Allan has addressed
these and they have also exercised the London based Stuart. In fact the two of them (alongside
David) studied together at Falmouth School of Art (“more years back than we care to remember”
they suggest) and only recently discovered their joint interest in the same part of the county that
Stuart has been visiting for many years now. Reid has a long standing practice that has seen
exhibitions across the UK and in New York from his studio in East London and his pictures
reflect a lifelong regard for a delightful kind of abstract impressionism that takes in a sense of
place that is as likely to be the Sierra Nevada as a tract of hollow way crossing a friend’s
property in Dorset.
Locations have played their part in the careers of Sarah and David too. Recently Scalloway in
the Shetlands, Cape Cornwall and Summer 2019 at Allan and Moira’s (whilst they took to
Wainwright’s Coast to Coast) have been three such working trips. Both have extensive
exhibitions and teaching careers exhibiting in far flung places like South Korea and China as
well as Sweden and Portugal and another dozen countries. Teaching has been closer to home,
David was Professor of Art at Derby University and Sarah is Senior Lecturer in Fine Art at
Staffordshire University. Sarah’s recent work focuses on drawing as a medium with a concern
for global issues, often obliquely political with a environmental commitment that she shares with
Moira although she is at pains to stress that “my work has at its centre an open ended
questioning that allows the viewer space for interpretation”.
David responds to external stimuli that are as much psychological as physical. “I’d say my
internal dialogue is as much to do with moods, sounds, smells, touch, and social history as my
visual sense of place”. He suggests his responses include a willingness to play with diverse
media; painting, photography and drawing all have a place in his toolkit. In this instance a virtue

has been made of the quantities of lumber lying around the studio that have been fashioned into
what he styles as Paintings Standing Up. These provisional constructions are entirely the
product of the ‘lockdown’ and relate to memories of events, happenings, places and people that
preceded the months of isolation in which they have been fashioned.
Days Like These was a title out of Allan’s love for the music of Van Morrison and with an
obvious nod to COVID19 isolation in which the five have perforce communicated entirely on
video. Though as he notes several others of his album titles might have fitted as well…Beautiful
Vision or The Healing Game maybe…or with a wry smile, What’s Wrong With This Picture?
Artists:
Moira Baumbach – Printmaker
Allan Green – Painter
Dr Sarah R Key – Visual Artist
Prof David Manley – Contemporary Artist
Stuart Reid – Painter